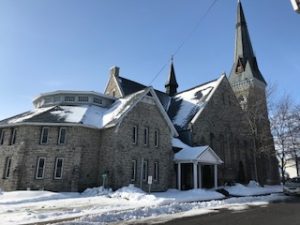 In the early 1880s, the small pioneer congregation of Winchester’s Methodist Episcopal body (later changed to the United Church of Canada) raised $10,000 (over $200,000 in today’s dollars) to build themselves a church. First, they built a beautiful Sunday School Hall with tiers of rooms rising to a multi-section roof. The congregation worshipped here until the sanctuary itself was completed in 1886. The construction process used mostly local materials, including limestone quarried on a nearby farm and cut by hand. The church became an important sanctuary in hard times, whether this was the daily challenges of rural life or the arrival of international troubles like war.

In the 132 years since it was completed, the church has gone through many changes, with generous donations from the community accounting for some of its stunning features, like its stained glass windows or pipe organ. In 2013, an earth tremor caused the east gable wall to collapse. Just as the church’s original construction was a painstaking labour of love, so too was its recent reparation process. By the end of 2017, the church’s east gable wall and bell tower had been restored, and the church is once again standing tall as a proud landmark in Winchester.