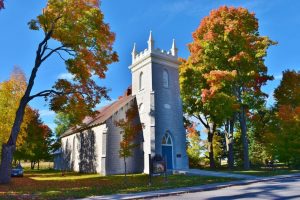 The Wilton Community Hall began its life in 1873 as the Wilton Wesleyan Methodist Church, which later became the Wilton United Church. In 1969, the Wilton Women’s Institute bought it for $1 to use as a community centre and worked enthusiastically to restore and maintain the limestone building. For decades, the hall hosted chilifests, winter carnivals, converts, theatrical events, sales, potluck dinners and celebrations of all kinds. By 2012, the Women’s Institute was down to 10 members, half of whom were over 80. Despite their herculean fundraising efforts, the Institute could not keep up with the growing list of repairs. Determined that the historic building remain a public space for the community, the sold it to Loyalist Township and the newly formed Wilton Community Association for $1, making it the second time in less than 50 years that the hall changed hands for a loonie. Though newly repaired, the hall has kept some of its original features. Most important of all, as the Wilton Community Association carries the torch of community spirit that the Women’s Institute ignited decades ago, the Hall has maintained its role as a cherished gathering place for Wilton.