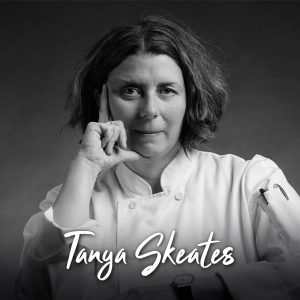 Chef Tanya Skeates, a native Montrealer, holds a wide range of experience from working in prestigious places such as Mosimann’s in London England where she cooked for the British Royal Family, the Kulm Hotel in St. Moritz, Switzerland, Rideau Hall (the Official Residence of the Governor General), and as Acting Chef for the Right Honorable Justin Trudeau and his family.

After returning from Europe and working for a time in Ottawa leading some of the popular restaurants of the time, such as the Manx and the Black Cat, she opened her own restaurant in Wakefield, Quebec. Soupçon became a popular hub, with a loyal local following. There she continued to develop her own unique style of supporting local farmers and producers while adding a touch of influence of her travels throughout Asia and Australia.

In 2018 she began teaching at Algonquin College as an instructor in the Culinary Arts program. Her passion and curiosity for food and culture is contagious and it is here that she feels that the cumulation of her extensive 28-year career has created the perfect grounds for her to influence and inspire the next generation of culinary students.

She currently lives amongst trees in Val des Monts with her husband and two Labrador retrievers. 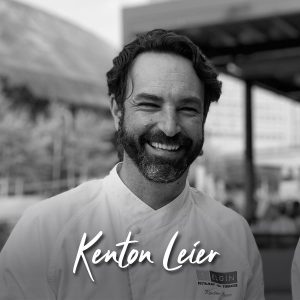 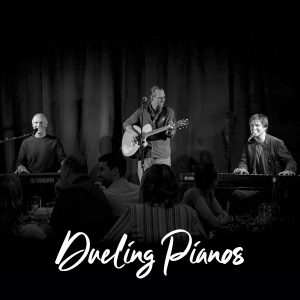 Dave Kalil, Tyler Kealey and Todd Huckabone have been a staple of the music scene in Ottawa known as the Dueling Pianos. Their musical ability and interactive personalities have captivated audiences since they formed the group in 2002.

With both Dave and Tyler at the keyboards, they are held together by Todd on guitar to form a solid show of endless classic hits spanning several decades of music. Playing a blend of requests from the audience, blistering guitar and piano solos, three part harmonies, and random comedic impromptu moments, their show has won over the crowds they perform for time after time.