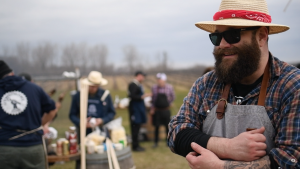 Chef Nick Benninger found his calling at the age of 16 working at a summer camp in northern Ontario. He fell in love with the kitchen and cooking and since then has “rooted” his career in many of the philosophies he learned in that first encounter with food service.  After attending George Brown College, Nick completed his apprenticeship working at kitchens throughout Ontario and finally settling back down in his hometown of Kitchener-Waterloo.

In 2008, Nick opened Uptown 21 with his wife Natalie and, in 2013, the couple went on to open Taco Farm. Uptown 21 has been included in Where to Eat Canada every year since it opened, and recently Taco Farm was featured on the television show You Gotta Eat Here!

In 2016, Nick added two landmark restaurants, Marbles Restaurant and Harmony Lunch, to the portfolio of kitchens that he manages in uptown Waterloo. Having grown his brand to 4 establishments, it only made sense to create an umbrella company and, in 2017, Fat Sparrow Group was born.

In 2018, Fat Sparrow acquired the Stone Crock Group in St. Jacobs, which would increase the portfolio to 6 restaurants, a catering company, bakery, butcher shop, 3 market stalls and a wholesale food producer totalling 220 employees.

Nick has twice appeared on the Food Network, was recognized in Waterloo Region Record’s annual 40 under 40, and joined a local filmmaker to create a food show celebrating the 519 food scene called ‘Nick and Taylor Make A Food Show!’

An early adopter and leader in the local food movement, Nick is proud to showcase the cornucopia of great ingredients and produce found in the Waterloo Region.

VEGETARIAN OPTION
*only available by pre-order 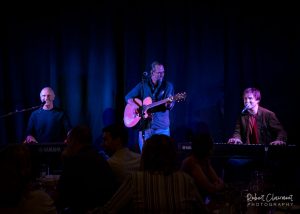 Dave Kalil, Tyler Kealey and Todd Huckabone have been a staple of the music scene in Ottawa known as the Duelling Pianos. Their musical ability and interactive personalities have captivated audiences since they formed the group in 2002.

With both Dave and Tyler at the keyboards, they are held together by Todd on guitar to form a solid show of endless classic hits spanning several decades of music. Playing a blend of requests from the audience, blistering guitar and piano solos, three-part harmonies, and random comedic impromptu moments, their show has won over the crowds they perform for time after time.