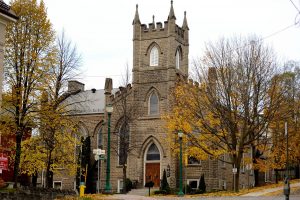 Built in the early 1900’s to replace the original church lost to fire, St. John’s United Church has been serving the City of Brockville for nearly two centuries. Known as the friendly church on King Street, this historic building is the only main-street church in downtown Brockville.

On January 1, 2014, large sections of the sanctuary’s ceiling fell down onto the pews below. Only the night before, those very pews had been filled with a large audience during a New Year’s Eve concert. It was a close call, and when the congregants got over the scare, they were faced with a frightening repair bill. Thanks to loans, insurance claims and donations, the congregants were able to remodel their beloved sanctuary. To help with the repair costs, they converted their choir loft to a stage and began renting the space to community groups at an affordable price. Seating over two hundred people and boasting some of the best natural acoustics in the city, the sanctuary hosts dramatic productions, musical concerts of all kinds and, of course, worship services.