The congregation itself has been gathering on this site since 1822, but the current stone structure of St. Andrew’s Presbyterian Church on Centre Street dates to the late 1800s. St. Andrew’s was a popular place of worship from the very beginning, located at the centre of an extensive area for worship in the Presbyterian Synod of Upper Canada. 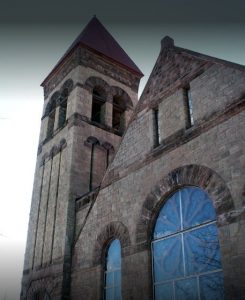 At that time it had a seating capacity of just under 400 people and it would consistently draw at least 380 worshippers each Sunday! After a devastating fire in 1892, the community rallied, literally overnight, and a reconstructed church was furbished complete with a magnificent organ and exquisite hand crafted furnishings just over a year later.

There have been changes over the years to this unique community gathering place – an additional hall and auditorium were added to the lower floor, the organ was turned into a glorious pipe organ, and now there is also a handsome illuminated church outdoor notice board. Some things remained constant – the intricate stained glass windows and the unique, elevated round theatre-style pew orientation.

Some interesting nuggets at St. Andrew’s in Prescott include the stained glass windows crafted by H. Horwood and Sons, who had a well-recognized business in Prescott and surrounding communities. Considered geniuses by many, they also created the windows at the Ottawa Public Library and some of the early windows at the Notre Dame Cathedral in Ottawa. The bell here is also of note, as it was re-cast after the fire and donated in 1892 – weighing more than 2,500 lbs. Rumour has it that it takes a strong pair of arms to ring that bell and alert the entire community that something consequential is happening! The organ was donated through John P. Wiser (yes, the Wiser of whiskey fame…) and matching funds raised by the church community after the fire. Its woodwork is quarter-cut southern oak in natural colour and was prepared in the Romanesque style. It was refurbished in the 1950s. The accessible stage was beautifully enhanced in 2014.

But the one thing that has never wavered over 200 years on this site is the feeling of community enthusiastically working together towards a common goal.  That continues strong today both as the church itself and as partners in the music and the artistic fabric of Prescott and the Upper St. Lawrence region.