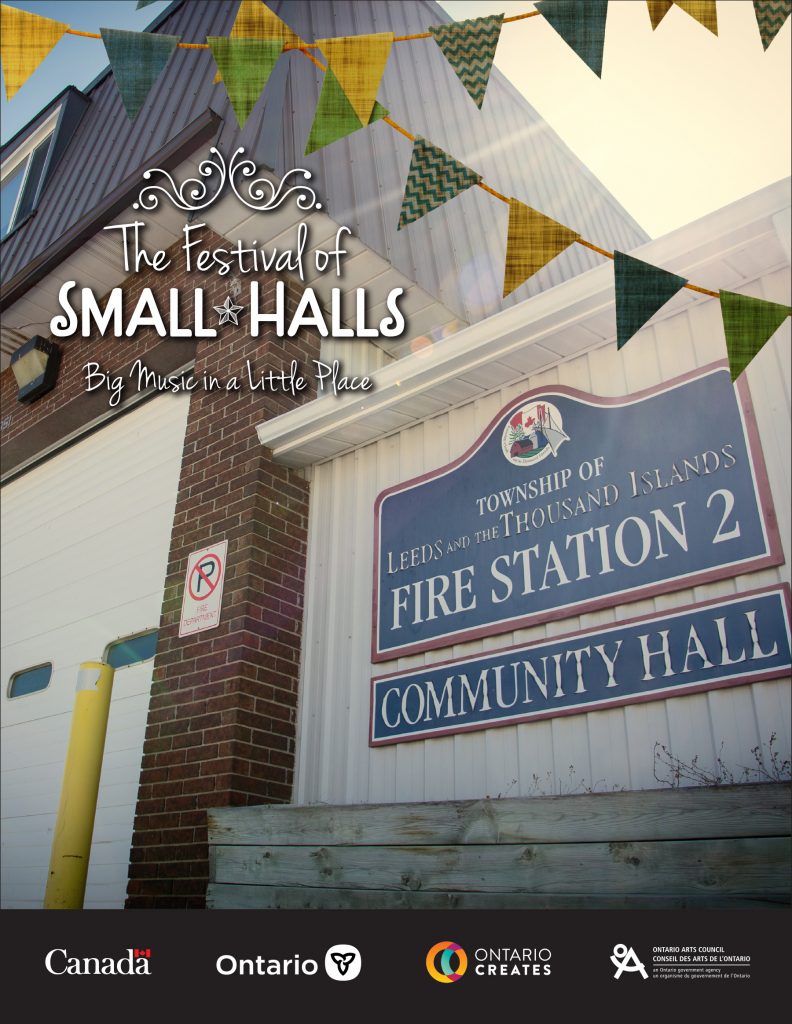 Reflecting on the connections fostered through Small Halls

Liz Huff, former co-ordinator of Seeley’s Bay Steps Up: “News – both good and bad – travels through a fascinating variety of networks in rural communities, and no one network controls the channel. The parents-with-kids-currently-in-school network is fast and influential. The longstanding church leaders, farm families and agriculture partners are pretty quick to connect too. The newcomer-boomers and retired-hippie-music-lovers are equally effective at keeping their ears to the ground. And sometimes these channels converge into a joyous chorus of community love as was the case when the Festival of Small Halls and Seeley’s Bay began their mutual love affair.

Back in 2014 I was the volunteer co-coordinator of a project called Seeley’s Bay Steps Up – a rural economic development initiative funded by local donations and help from the federal and provincial governments. As a relative newcomer to the community I felt I could see unlimited potential for our village – not far from Kingston, and sitting on the shores of the remarkable World Heritage Rideau Canal and in the heart of the UNESCO-designated Frontenac Arch Biosphere Reserve. I had heard about the first Small Halls venture in Perth in 2014, and the efforts of the Ottawa Bluesfest to share the love of live music beyond the city. Then one day in early 2015, I received emails from three different people about the possibility of putting on a Small Hall event in Seeley’s Bay. The stars lined up. We had a resident who knew the Bluesfest folks. We had a resident who had won an Academy Award for set design. We had an active and happy team of volunteers who were keen to do whatever it took to attract the festival to our midst, to make the performers and FOSH folks feel welcomed, and to put our little village on the map.

Our hall was not a beauty, but it was big – seating 250 legally and accessibly. It sits above the fire station – and as most know, the volunteer firefighting community is respected and loved in rural communities. Our first performer back in 2015 was Corb Lund, with local opener, Rueben deGroot, selected by the community. I don’t think many of us had even heard of Corb Lund but we trusted the talent choices of the FOSH folks completely, and he turned out to be the perfect performer for our hall. Before he even hit the stage, Corb asked to be taken downstairs to the fire station to see our old 1920s era pumper and chat with the crew. And then he proceeded to blow our minds with the calibre of musicianship of his band, and of course, his incredible song writing.

We have never looked back. Small Halls is an annual highlight for the village, and we are now on the Deck the Halls circuit as well. The hall has been renovated to ‘step up’ to the higher profile we are strutting to concert guests from near and far… paint, kitchen equipment, renovated LED lighting, new chairs – we’ve come a long way baby! The community continues to look forward to this event and appreciates the variety of musicians we have had come to Seeley’s Bay.”

This is the fourth in a mini series reflecting on what Small Halls means to several of the beloved hosting venues for the Ontario Festival of Small Halls.