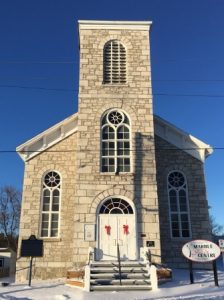 The Marble Arts Centre, or “the MAC,” began its days as a Methodist church in Bridgewater (now Actinolite in the Municipality of Tweed). Built in the 1860s of white marble quarried about 200 feet north-east of the site, it is thought to be Canada’s only white-marble church. After nearly two years of construction, the beautiful building was complete, boasting a fine-toned bell in the tower, an excellent organ in the choir loft and a seating capacity of 500. In 1889, a fire destroyed much of the community, including the church—only the four exterior walls were left standing. The building was restored, eventually becoming a United Church, and the congregation continued gathering there for well over a century. In 2005, with only 21 members left, the church closed its doors, holding its last service on its 141st
anniversary. 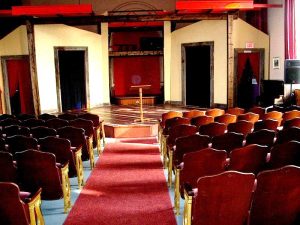 In 2008, the Tweed & Area Arts Council (T&AAC) purchased the building and has turned it into a vibrant centre for the arts. Thanks to the generosity of members and other volunteers, donors, local businesses and granting agencies, the MAC boasts amazing acoustics, beautiful theatre seating and a studio gallery for workshops and visual art displays.