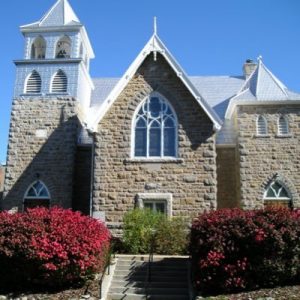 a Methodist church, was built to replace an original church that was destroyed by fire in 1902. Immediately after the fire, two congregants donated a prime lot called “the orchard” on the village’s main street, and the construction of the gorgeous limestone church was completed by 1904. Today, the oldest church in Manotick has become a beloved historic landmark, clearly visible at the south end of the old village. Boasting an offset tower with open belfry and metal roofing, hammer-dressed masonry and delicate stained-glass windows, the church is a beautiful example of turn-of-the-century architecture. Over the years, the building has been modified to keep up with the changing needs of the congregation and the broader community, but never at the expense of its historic character.

A visible anchor for the streetscape of Manotick, the church also holds pride of place in the community’s social landscape. The building has been at the center of social activity in Manotick for over a century. It happily opens its doors to many different community groups for all kinds of events and activities, from dance classes to Bingo games to Christmas parties. Thanks to its fantastic acoustics, the church is also a favorite venue for a wide range of concerts.