Can you hear those jingle bells in the distance? We’re almost a week away from decking the halls at our Hall-iday Shows!

The Almonte show on Dec .1 sold out online last week (a handful of tickets is still available locally at the Almonte Old Town Hall, 14 Bridge St.) – and the tickets for the inspiring show at the Seeley’s Bay Community Hall are selling briskly, too.

The Ontario Festival of Small Halls is so excited to bring Newfoundland’s, The Once, to fill these two beloved halls with music. Want to learn about the amazing Newfoundland-based trio, The Once? Watch a video here to get you in the mood for more. 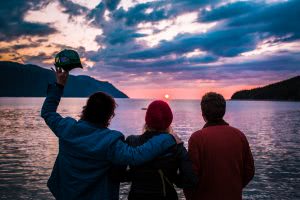 As you can see, with their folk roots still firmly in hand, Phil, Geri and Andrew have embraced a distinctly modern sound by the inclusion of drums and percussion, electric guitars, and sweeping keyboards. Having collected three Canadian Folk Music Awards, numerous EMCA awards and named Artist of the Year by the Newfoundland & Labrador Arts Council, The Once is no stranger to the stage. They have also been nominated twice for the JUNO Roots Traditional Album of the Year Award.

With the release of the EP, We Win Some We Lose, The Once enters a new era, with new sounds, new styles and new ideas. The whirlwind of the past few years has honed their sound and creativity, and having found their voice, the band is looking firmly ahead.

In addition to featuring great music, the shows will be a chance to showcase Almonte and Seeley’s Bay at a festive time of year, while celebrating community.

“Our small halls gave us such a warm welcome for our fall festival, we wanted the opportunity to showcase them during a time of year that really fosters that special feeling of community,” said Kelly Symes, general manager of the Ontario Festival of Small Halls.

“We’re looking forward to being at the Seeley’s Bay Community Hall and the Almonte Old Town Hall again, to present The Once for the holiday-themed show while also celebrating these cherished small halls during the festive season.”

Click here to learn more about the show or here to read about three ways to get tickets.

We were featured this week on the CKWS morning show – have a look here.

We can’t wait to deck the halls with you!