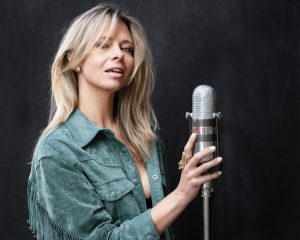 This October, the Ontario Festival of Small Halls audience will be treated to the release of Miss Emily’s third studio album, “Defined By Love.” In her upcoming Maberly appearance, Miss Emily – a 2022 Juno nominee – will be joined on stage by a backing band that features some of Canada’s most sought-after blues & soul musicians.

“Defined By Love” is a warts-and-all diary of lost relationships and found humanity that was produced by Juno award winner Steve Marriner. It features meditations on deception, resilience, pain and strength with co-writing by Rob Baker (The Tragically Hip) and the instrumental genius of Jimmy Bowskill (Blue Rodeo, The Sheepdogs); all grounded in a horn-drenched foundation of soulful blues and unparalleled vocals.

Since 2019, Miss Emily has brought the house down at venues across Canada, the US, the United Kingdom and Europe. Now she’s coming to ABC Hall with a show that will include the new album start-to-finish as well as fan favourites and a few special surprises. In a year which featured a Juno nomination, a second Maple Blues Female Vocalist of the Year award and an International Songwriting award – this is a not-to-be-missed event.