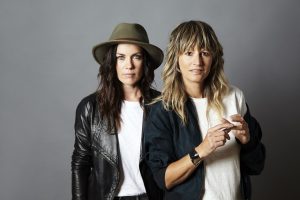 Brenley and Lisa are no stranger to tragedy, but finding a way to move through the dark to find a glimmer of light, has become a speciality of theirs. It seemed that bad luck had followed them around for nearly a decade. Brenley’s brother murdered in Toronto. Lisa’s brother was killed in a car accident. Canceled tours due to death and illness. And heartbreak. Yes, the pair managed to build a rock-solid friendship after a brutal breakup, all the while keeping the band intact. But back in January, 2016, they realized that their career was looking like it had begun to take comfort in that same well of tragedy. An album that was full of high energy and hope, sat unreleased, leaving the duo stuck in a bit of musical limbo. Nobody seemed to know what to do with it. They waited for the label to release it, and as they waited for months, the excitement was lost, and Brenley and Lisa found themselves, yet again, searching for a glimmer of light in the dark.

So, they did what they needed to do. They cleaned the slate. Took control back of every aspect of their career. And with that, came the freedom to make the music they wanted. It was the glue they needed to keep them from falling apart, both in their music, and emotionally.