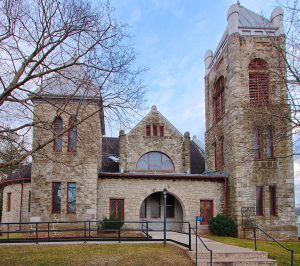 Elgin United Church, initially a Methodist church, was built to replace an earlier church that had become unsound. The congregation had known for a while that they needed a new building, but debts to the parsonage delayed their construction plans. In 1893, however, a dramatic event moved things right along. While helping to build a barn, a young man named Clarence Halladay boasted that he was not going to die “until Hell is frozen over and the little devils are skating on ice.” That day, he was killed by a falling beam.  A very large and curious crowd attended his funeral. With so many people packed into the gallery, the church began to creak and groan. People fled for their lives. No one was hurt, but it was clear: the time had come to build that new church.

The current church was completed in 1894 using volunteer labour and local materials. With the help of donations and grants, the congregation has maintained the church’s historic features while bringing the building up to date. Today, Elgin United hosts a wide range of community groups, services and events. Its naturally gorgeous acoustics and state-of-the-art sound system make it a favourite venue for musicians. Though regularly packed with people, this beautiful, well-made church is standing strong.