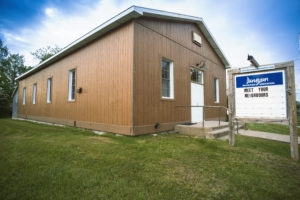 The Dunvegan Recreation Hall started life as the Orange Young Briton Lodge No. 43. The hall was built in 1919 on land purchased for $45. The structure was constructed from cement block and was originally two stories high.

By 1974, support for Dunvegan’s Orange Lodge No. 43 had declined, and the building was sold to the Dunvegan chapter of the Women’s Institute, which raised funds to remove the second storey and replace the roof. Eventually, after almost twenty years of activity, declining membership led the Women’s Institute to give up the hall. The volunteer-run Dunvegan Recreation Association purchased the building and its contents in 1992.

Though its focus has changed over the years, this building has been the centre of much of Dunvegan’s social life for almost a century. Thanks to a Trillium Grant, the hall has been refurbished and is looking great. From wedding and anniversary celebrations to céilidhs, ham suppers, Halloween parties, euchre lunches, and even shelter during the 1998 ice storm, the space has brought much joy and comfort to the residents of this tiny corner of Ontario, and promises to do so for a long time to come.