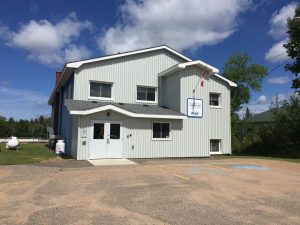 The Combermere Community Centre was built in the early 1970s with the help of senior government grants, local fundraising efforts, municipal contributions and an impressive number of volunteer hours. Major events, including the renowned Combermere Bathtub Races, were held here from the 1970s into the new millennium. Following Ontario municipal amalgamation in the late 1990s, management of the centre was centralized under the Township of Madawaska Valley, and the building fell into an era of sporadic use. However, due to the efforts of recent Combermere recreation committees and township councillors, the centre has once again become a busy gathering place. It is the go-to venue for weddings, funerals, anniversaries, birthday parties, community dances, meetings, recreation clubs, community service groups, bingo, dojo and much more. As the community’s Emergency Response Centre and Shelter, it played a crucial role following the F2 tornado that devastated Combermere in 2006.

Much like the community it serves, the Combermere Community Centre isn’t flashy, but it is functional and welcoming and occupies a very special place in the hearts of Combermere residents.

The Combermere Community Centre is located at 1095 Farmer Road, Combermere, ON, K0J 1L0.