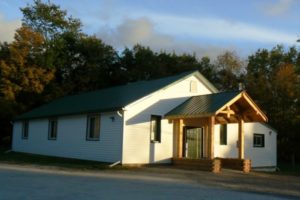 In 1947, two districts united to form a club with a hall for meetings and entertainment. The first fundraising event for the hall was a euchre party, which cost twenty-five cents for adults, and ten cents for children. The lucky first-place lady received stationary, while the male winner took home a pair of wool socks. By December of 1953, the hall was ready to hold its first Christmas party. Over the years, the hall has hosted fundraising dances, euchre nights, and parties. Members gather to celebrate Christmas, bid farewell to neighbours, and welcome newcomers. During the 1998 ice storm, the ABC Hall became the central hub for emergency workers.

Since the hall’s beginnings, its cost of membership has increased (from one dollar to ten dollars per family) and the building has been upgraded with modern conveniences and accessibility features, but the spirit of friendship and belonging out of which the hall grew remains the same. Today, thanks to the efforts of the modest-but-mighty Althorpe Bolingbroke Community Association, the ABC Hall is the cultural and social heart of this vibrant community.