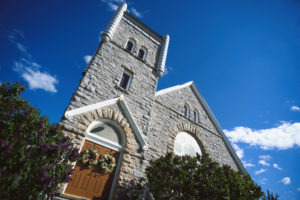 In August of 1903, the Balderson United Church’s foundation was laid with great ceremony; the oldest living communicant of the congregation, Mrs. Robert Whyte, placed the corner stone. The church’s construction relied on the generosity of its congregation. All of the local stone used, for example, was transported by volunteers on horse-drawn sleighs. The beautiful stained-glass cathedral windows were one of many donations from members of the congregation. Finally, on a crisp day in early October of 1904, the church, filled with bouquets of fresh flowers, held its first service.

Over the last century, some things have changed. For one, the heating and lighting systems are more reliable than they were with the original wood furnace and finicky acetylene gas chandelier that only the Reverend knew how to fix. What has remained consistent is the way the church supports its community through difficult times, including two World Wars and the Great Depression, and brings it together in times of celebration. Dinners and concerts have also been a staple in the church from its beginning, as have numerous committees and social clubs. Also unfailing is Balderson’s pride in its church, which, 113 years on and counting, continues to be a cornerstone of this vibrant community.