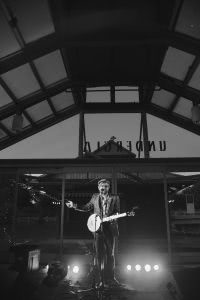 The History and Heart behind Ontario Small Halls

As one would expect, Small Halls started intimately but beautifully.

In August 2014, on a super moon weekend, the Ontario Festival of Small Halls story began. Inspired by the spirit of community, hospitality, exceptional music, and fun that has made small halls festivals in Prince Edward Island and Australia such treasured events, the Ontario festival brought the talented and charming Old Man Luedecke to perform in three intimate, historically rich venues in Perth, Gananoque, and Bloomfield.

Fast forward to 2021 and the Small Halls love continues to spread as the festival celebrates its eighth season. Taking place from October 1 to 17, 2021, the festival is expecting to put on more than 35 shows across Eastern Ontario. Small Halls is going strong with its vision of bringing big music to small places, thriving on the outpouring of enthusiasm from musicians, communities, and audience members who have come together from across the world, across Canada, and across town to make the festival such a success.

The festival’s first expansion took place in 2015 when it jumped to 14 beloved small town locations across Leeds, Grenville and Lanark County. Cherished halls engrained in the fabric of their communities played host to first-rate performers like The Strumbellas, The Good Lovelies, Corb Lund, The East Pointers, Beòlach, Fortunate Ones, Gordie MacKeeman and his Rhythm Boys and Kelly Prescott. These musicians stepped off the big stage to travel to small towns, to be ushered into historic buildings at the heart of some of Ontario’s most vibrant communities and greeted with all the warmth of a small-town welcome. The host organizations threw themselves into the festival. They put on community dinners and country markets. They sold tickets, decorated the halls, offered local openers, and spread the word. Twelve of the festival’s 15 shows sold out that year, and the musicians delivered intimate, jaw-dropping performances complete with lots of laughter, foot stomping, storytelling, dancing, and downright musical magic.

In 2016, the festival expanded to include 24 communities, welcoming new villages to take part including Maxville, Athens, Burritt’s Rapids, Elgin, Pakenham, Winchester, and more. Canadian favourites like Basia Bulat, Elliott Brood, Sheesham & Lotus and Son, Kelly Sloan, Brock Zeman, Harrow Fair, Sherman Downey and Matthew Byrne, Jim Bryson, The Abrams, Miss Emily and many more graced the small stages. International artists including Breabach, Hat Fitz and Cara and Darlingside attended for the first time, playing to sold-out crowds, with many of their new fans hearing them for the first time. 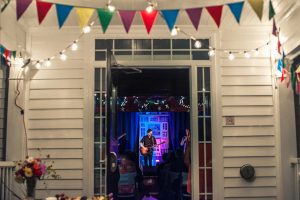 Ten more locations were added to the festival circuit in 2017, including Dunvegan, Alexandria, Merrickville, Kilmaurs, Dacre, Tamworth, Toledo, Balderson, Renfrew and Tatlock. They all jumped on board to open their doors to Small Halls shows and what a success they were! Artists like Ashley MacIsaac, Jenn Grant, Rose Cousins, Great Lake Swimmers, The Outside Track, Change of Step, The Abrams, Les Poules à Colin, Dave Gunning, Old Man Luedecke, Rosie & the Riveters, Jessica Wedden, Sacha, Julia Finnegan, Ian Sherwood, Jillian Kerr and many more, wowed audiences.

The festival kept growing and 2018 was a big year. Not only was the festival now in 33 locations, but a new bit of magic was also introduced at Kilmaurs: the Chef’s Table, a local farm-to-table feast. The festival was also recognized with the award for Best Small Festival at the CMW Live Music Industry Awards. During the fall, artists like Colter Wall, Kathleen Edwards, Stephen Fearing, Barney Bentall, Lindi Ortega, Jim Bryson, Skydiggers and Basia Bulat played to sold out crowds. The new Deck the Halls Series was expanded to offer nine holiday shows including the festival’s first show at the National Arts Centre in Ottawa, featuring Matt Andersen, Suzie Vinnick and Donovan Woods.

The Chef’s Table events proved so popular that they were expanded to six unique locations in 2019: Saunders Farm, Pinhey’s Point, Stanley’s Olde Maple Farm, Brown’s Inlet and Cumberland Heritage Museum. The fall festival was held in 34 locations and performance highlights included The East Pointers, Lee Harvey Osmond, Madison Violet, Justin Rutledge, Harry Manx, The Weather Station, LEAHY and the Devin Cuddy Band. The holidays series was the most popular to date with Deck the Halls including 13 shows featuring Fortunate Ones, The Once, Coig and Royal Wood (and a marriage proposal on stage in Tweed! She said yes.). 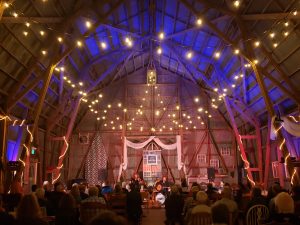 The 2020 Festival saw epic pivots during a world-wide pandemic to reimagine what it was capable of producing. We started off the year producing an intriguing free podcast, working with local storytellers in a dozen of our Small Halls communities to record authentic tales from across Eastern Ontario. Small Halls also worked with municipalities and health authorities to create our own health protocols and guidelines to ensure a safe and distanced festival in October. We focused on three locations: Almonte Old Town Hall, Seeley’s Bay Community Hall and Brockville’s St. John’s United Church and welcomed artists who hadn’t been on stage for months – and live music enthusiasts who hadn’t been to a show in close to a year. It was all at once a surreal, cautious and intensely happy experience. We welcomed Hannah Georgas, Hawksley Workman, Great Lake Swimmers, Ben Caplan, NQ Arbuckle, The Abrams, Devin Cuddy, Wild Rivers, Nambi, Theo Tams, and Johnny Shay. The Festival also brought its popular Chef’s Table series to life on the patio at the National Arts Centre, where world-class Canadian chefs created masterpieces with local food – all accented by a band on a boat.

The festival’s story is still unfolding, so stay tuned for the rest. But (spoiler alert) one thing is for sure: there will be many more unforgettable moments of music in well-loved spaces.