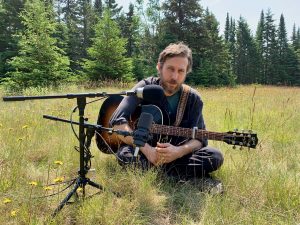 Featuring a blend of acoustic instruments, rural soundscapes, and wistful vocals, Great Lake Swimmers are a critically acclaimed indie folk group led by songwriter/vocalist Tony Dekker. Founded in Wainfleet, Ontario and based out of Toronto, the group emerged in 2003 with a succession of albums that relied heavily on atmosphere, due in large part to their being recorded live to tape in old silos and rural country churches. They hit a career high in 2009 with their fourth full-length effort, Lost Channels, which was shortlisted for that year’s prestigious Polaris Music Prize and nominated for Canada’s Juno Awards. In 2012 the band adopted a more studio-centric sound, though they retained the pastoral warmth that fueled their earlier releases. Dekker issued a solo album in 2013, but continued to release albums under the Great Lake Swimmers banner, including 2018’s The Waves, the Wake, which saw Dekker and company experimenting with more orchestral sounds.

The group first appeared in 2003 with a haunting self-titled debut that was recorded in a grain silo in Wainfleet, Ontario and released by Weewerk records, a small label based in Toronto. Their second album, Bodies and Minds, was released in 2005, with both albums being released stateside by Misra Records that year, and in Europe on the Paris, France imprint Fargo Records. Recording sessions for Bodies and Minds took place in an old, rural church in Wainfleet, Ontario, featuring another blend of homespun folk and lush, intimate Americana.

Although already popular in Canada, the band began building a wider audience in 2007 by signing to a new label, Nettwerk, and releasing the well-received Ongiara. The album’s first track, “Your Rocky Spine,” topped the Canadian indie charts and appeared on the soundtrack to Showtime’s Weeds. Such increased attention kept Great Lake Swimmers on tour for the better part of two years, but they still managed to take some time off to record a fourth album. Traveling between multiple locations in the Thousand Islands region and elsewhere in northern New York state, the group hit a creative high peak with the Polaris Prize-shortlisted and Juno-nominated Lost Channels, which was released in 2009. The Legion Sessions, an EP featuring live versions of several Lost Channels tunes, also appeared that year. In 2012 Great Lake Swimmers released New Wild Everywhere, their first album to be recorded in a traditional studio. For 2015’s A Forest of Arms, the group recorded in studios, small music venues, and a variety of unconventional spaces, including Tyendinaga Cavern and Caves, the oldest natural cavern in Ontario.

Celebrating their 15th anniversary in 2018, Great Lake Swimmers first offered an EP called Side Effects, which displayed both their pop-oriented side as well as a new direction that moved away from Dekker’s traditional guitar approach, instead utilizing instruments like harp, lute, marimba, and banjo. Recorded in a 145-year old church in London, Ontario, the band’s seventh album, 2018’s The Waves, the Wake, continued to experiment with styles, adopting a more orchestral and improvisational approach to modern folk music.

Great Lake Swimmers were nominated twice for Canada’s Juno Awards, shortlisted for the prestigious Polaris Prize, and won a Canadian Indie Award for Favourite Folk/Roots Artist/Group. They have shared the stage as support for such musical luminaries as Robert Plant, Feist, Daniel Lanois, and Calexico, and have appeared as headliners at many of Canada’s major folk music festivals. The CBC has called them “a national treasure” with a sound that is at once familiar and distinct, using the tools of folk music as the starting point to delve deeper.

“Dekker’s preoccupation with the Canadian state of mind flourishes in his lyrics. Few songwriters are able to convey the country’s harsh beauty as well. …Canadian folk tradition personified in the 21st century” – Exclaim!