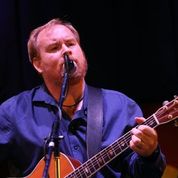 Chris Murphy has been a professional musician in the Kingston area for over 20 years and has toured across Canada, as well as performances in the US, Ireland, and China. Chris got his start in the Celtic/East Coast band Shores of Newfoundland and later founded the band Crooked Wood. Presently, he is a member of the Folk/Celtic band Turpin’s Trail. In addition to his solo and band endeavours, he has served as accompanist for artists in various genres, including country singer Abby Stewart, and singer/songwriter Séan McCann (formerly of Great Big Sea). In 2012, Chris travelled to Cape Breton to record a solo album entitled “Finally Coming Home”, produced and recorded by the internationally-renowned musician J.P. Cormier.